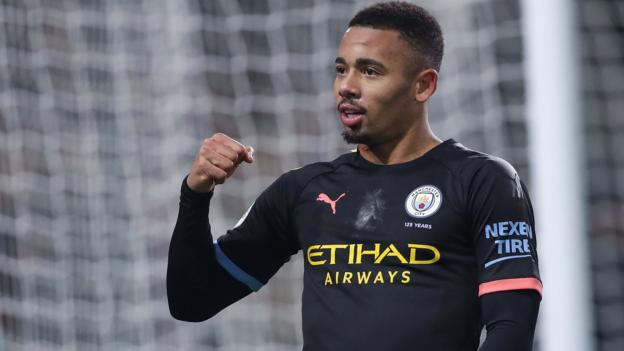 Gabriel Jesus scored twice as Manchester City got back to winning ways in the Premier League with a comfortable victory at Burnley.

City had won only once in their previous five games in all competitions to start the day 11 points behind leaders Liverpool.

But they were convincing at Turf Moor with Jesus curling home a fine opener for his first goal in 11 games.

The Brazilian then volleyed home Bernardo Silva’s cross after the break.

Midfielder Rodri added a stunning third from 20 yards and substitute Riyad Mahrez netted a fourth to take them back into second place in the league.

Robbie Brady blasted in a late consolation for the Clarets, his first Premier League goal in more than two years.

The match had the unusual kick-off time of 20:15 GMT because it was being streamed live online by Amazon.

Leicester could move back above the champions if they get a point or more at home to Watford on Wednesday.

Slick City get the job done

After a dispiriting month of results – a devastating defeat by Liverpool, two Champions League draws and a narrow win over Chelsea followed by a 2-2 draw with Newcastle – the three points was the most important thing to City.

“Burnley away is always Burnley away, so we will just try to win,” City boss Pep Guardiola said before the game. The team had come away with two narrow wins and a draw in their three visits to Turf Moor under the Catalan.

This one did not feel like such hard work.

They created plenty of chances against a side just trying to contain them – and thought they had led early on when Jesus flicked in from Angelino’s volley but was flagged offside.

The 22-year-old did not look like a player out of form – he had not scored in 10 games for club and country – when he curled home from the edge of the box from David Silva’s pass.

Kevin de Bruyne – who was involved in the build-up to that goal – was instrumental in midfield with a couple of shots on target, as well as his usual passing game.

City looked comfortable all the way through and the second goal came when De Bruyne passed to Bernardo, whose cross was volleyed into the top corner by Jesus.

Jesus is now the third top scoring Brazilian in Premier League history – with 32. Only Liverpool players past and present Philippe Coutinho (41) and Roberto Firmino (52) have scored more.

He went close to a hat-trick when he swept a shot wide of the far post from a tight angle.

His return to goalscoring form has come at an important time with the club’s record top scorer Sergio Aguero out for a few weeks with a thigh injury.

“Sergio is a legend of football. I have to score when I play because Sergio scores every time,” Jesus said after the game.

Club-record signing Rodri blasted home on the bounce from outside the box after David Silva’s shot was blocked. And Bernardo set up Mahrez, who took on several Burnley defenders before guiding home his 50th Premier League strike.

The late Brady goal will be a frustration as it means City have not kept a clean sheet in eight games, since a 3-0 win over Aston Villa on 26 October.

Not worth Burnley dwelling on defeat

Burnley will not have identified this game as one they would expect anything from. They have won only once in the past 27 games against the ‘big six’ in the Premier League.

Manager Sean Dyche said his team had “made a few mistakes lately, against the big guns, that we can’t make again” and only played Chris Wood up front, relegating Ashley Barnes to the bench.

They spent the entire game on the back foot, at one stage with all 11 players in their own penalty area.

Their first shot was Dwight McNeil’s blocked effort after 42 minutes – and their first effort on target was the youngster’s 25-yard free-kick on the hour mark.

Brady will have enjoyed his late goal – his first in club football since Burnley’s win at Bournemouth on 29 November 2017 – set up by his childhood friend Jeff Hendrick, but it was merely a footnote.

In such a tight league – with three points the gap behind fifth-placed Crystal Palace and Burnley in 11th – Dyche should not worry too much about this defeat.

Man of the match – Gabriel Jesus