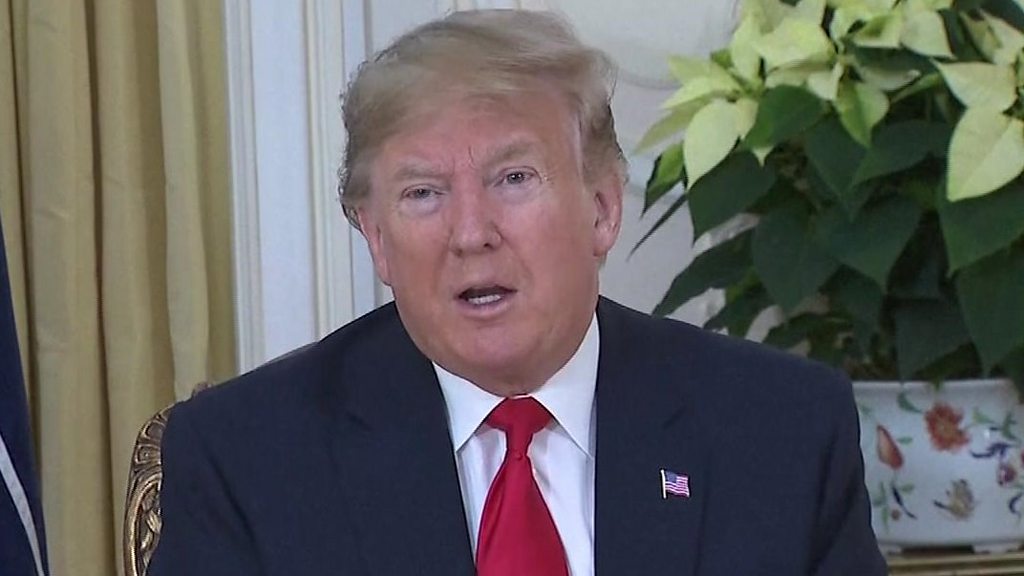 US President Donald Trump has accused his French counterpart Emmanuel Macron of being “nasty” for saying Nato was “brain dead”.

Mr Trump is in London for a summit marking the bloc’s 70th anniversary.

At a news conference, Mr Trump said Nato served a great purpose and Mr Macron’s remarks had been “very insulting”.

He also said he could see France “breaking off” from Nato, but did not explain why.

Nato – the North Atlantic Treaty Organisation – was founded after World War Two to counter the threat of Soviet expansion. The 29 member states pledge to come to the aid of one another should any come under attack.

But speaking last month, Mr Macron had complained that Nato members were no longer co-operating on key issues.

He described the alliance as “brain dead”, stressing what he saw as a waning commitment from its biggest guarantor – the US.

The summit, due to get under way later on Tuesday, has already been overshadowed by a bitter row between member states France and Turkey, and a continuing debate over money.

Turkish President Recep Tayyip Erdogan has said he will oppose Nato’s plan for the defence of the Baltic if it does not back Turkey over its fight against Kurdish groups it considers terrorists.

What did Mr Trump say?

Sitting alongside Nato Secretary General Jens Stoltenberg, President Trump said Nato “serves a great purpose”, but was then asked what he thought about Mr Macron’s statements.

He said he thought the French leader had been “very disrespectful” to other alliance members.

“It is a very, very nasty statement. I think they have a very high unemployment rate in France. France is not doing well economically at all,” he said.

“It is a very tough statement to make when you have such difficulty in France when you look at what is going on. They have had a very rough year. You just can’t go around making statements like that about Nato. It is very disrespectful.”

He added: “Nobody needs Nato more than France… the US benefits the least. It’s a very dangerous statement for them to make.

“I’m looking at him [Mr Macron] and I’m saying that he needs protection more than anybody and I see him breaking off [from Nato]. So I’m a little surprised at that.”

Mr Trump reiterated his long-standing complaint that many other Nato members were not contributing enough financially. He singled out Germany as falling short. According to Nato’s latest figures, Germany spends 1.36% of GDP on defence when the Nato guideline is 2%.

But he added: “The world has changed a lot and Nato is changing right now. I’ve become a bigger fan of Nato because they have become more flexible.”

Mr Erdogan had earlier joined the dispute, suggesting that Mr Macron was the one who was “brain dead”, accusing him of “a sick and shallow understanding” of terrorism.

A major problem for Nato

Turkey is posing a major and developing problem for Nato; a problem that if not resolved, could test the very boundaries of its membership.

It is effectively holding hostage a response plan for the rapid reinforcement of the Baltic region – which must be approved by all 29 Nato members – until it gets what it wants in its own region.

Turkey wants all other Nato countries to regard Kurdish separatist groups in Turkey as terrorists. This would effectively take Nato into domestic security matters which most allies see as none of their business.

Add to this Turkey’s unilateral actions in Syria; President Erdogan’s recent row with Emmanuel Macron over the Kurds; and Turkey’s purchase of a sophisticated Russian air defence system – an extraordinary step for a key Nato player – and you are well on the way to a full-blown crisis between Ankara and the alliance.

Why is Turkey an issue?

Ahead of his departure for London, Mr Erdogan said Turkey would not approve a plan to defend Poland, Lithuania, Latvia and Estonia in the event of a Russian attack unless Nato recognised the Kurdish YPG militia as terrorists.

The YPG leads the Syrian Democratic Forces (SDF), key allies of the US-led coalition against the Islamic State (IS) group in Syria. In October, Turkey launched an operation in Kurdish-controlled areas of northern Syria to create a “security zone” along its border.

That military action deepened fractures between Turkey and other Nato members and took place after President Trump controversially pulled US forces out of the region, reportedly without consulting allies.

Mr Macron and Mr Erdogan will come face-to-face in Downing Street on Tuesday in a four-way meeting also including German Chancellor Angela Merkel, and the host, UK PM Boris Johnson.