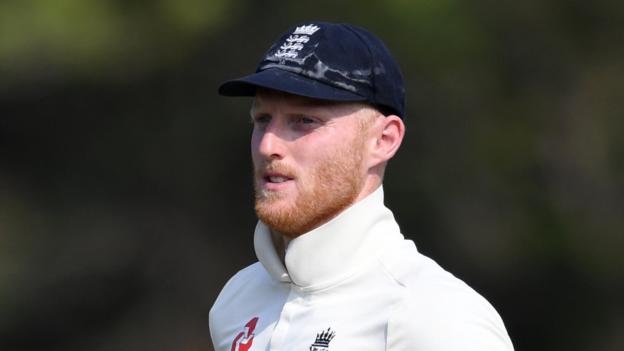 Ben Stokes will captain England for the first time next week after it was confirmed Joe Root will miss the first Test against West Indies to attend the birth of his second child.

Root, 29, will leave England’s training camp in Southampton on Wednesday, with the birth expected later this week.

With the series being held in a bio-secure environment, Root will have to self-isolate for a week after leaving hospital before re-joining the squad.

The first Test begins on 8 July.

Root, who will also miss England’s intra-squad warm-up match which begins on Wednesday, will rejoin the squad on 13 July before the second Test at Old Trafford, which begins on 16 July.

Stokes will become the 81st man to lead England in a Test, and the first all-rounder since Andrew Flintoff.

Wicketkeeper-batsman Jos Buttler will serve as his vice-captain.

Stokes has no professional captaincy experience, saying on Monday the last time he led a side was during his time with the Durham academy.

Stokes has had two spells as vice-captain, having taken up the role when Root was made captain in 2017.

He was stripped of the role in following an incident outside a Bristol nightclub in September 2017; he was charged with affray, but later acquitted.

He was reinstated in 2019 during a stellar year which included leading England to victory in the World Cup final and playing one of the all-time great Test innings in the remarkable one-wicket Ashes win over Australia at Headingley.

On Monday, he said he would not alter his style of play if he was confirmed as captain.

Speaking before Tuesday’s announcement, he said: “Getting the opportunity to captain England is a huge honour – even if it’s only the once you can still say: ‘Yeah, I’ve captained England.’

“It’s a huge honour to think about, and something I’m really looking forward to if the opportunity presents itself, but also at the same time I know I’m only stepping in for the one game because of Joe’s personal situation.”