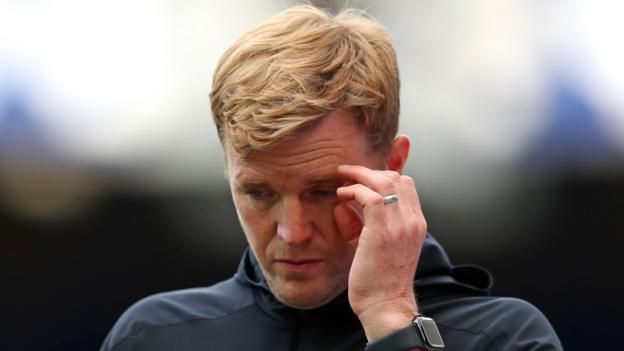 Bournemouth manager Eddie Howe has left the club by mutual consent after their relegation from the Premier League.

The 42-year-old led the Cherries in more than 450 games across two spells spanning more than a decade.

The Englishman, who leaves after talking to club officials on Saturday, said he believes it is “the right time for the club to have a change”.

Bournemouth’s five-year stay in the top flight ended despite a 3-1 win at Everton on the final day of the season.

“Having spent a total of 25 years with the club as both a player and a manager, this decision – made together with the club – is one of the hardest I’ve ever had to make,” said Howe in an open letter to fans.

“However, although the affection and love I have for this football club will always remain, we collectively feel that now is the right time for the club to go in a new direction.

“Bournemouth will always be in my heart, but I firmly believe now is the right time for the club to have a change.”

Bournemouth had risen from League Two to become an established Premier League team under Howe, who guided them to three promotions in six seasons.

But they lost 22 of their 38 games to finish 18th in the table, one point from safety, and return to the Championship after five seasons in the Premier League.

A number of big-money signings have not worked out for the Cherries in the manner Howe – who played more than 250 times for the club – will have hoped for.

The south coast club also suffered with injuries, not least experienced defender Charlie Daniels being ruled out for the season in August 2019 and promising winger David Brooks requiring two operations that saw him miss the majority of the campaign.

Cherries chief executive Neill Blake said Howe was a Bournemouth legend who has helped “transform the identity and history of the club”.

He said the decision to part company was “even harder given our close personal friendship”.

31 December 2008 – Howe, aged just 31, takes caretaker charge with the club 91st in the Football League and facing relegation and potential liquidation. Despite starting the season on -17 points, the Cherries stay up on the final day of the season after winning the last three games.

8 May 2010 – Bournemouth are promoted to League One in Howe’s first full season as permanent boss, finishing second on 83 points.

14 January 2011 – In his first season in League One, Howe takes the Cherries into the play-off positions and is courted by clubs from the Championship. He eventually leaves for Burnley. Bournemouth go on to lose on penalties to Huddersfield in the play-off semi-finals.

16 October 2012 – After 18 months without notable success at Turf Moor, Howe returns to Bournemouth. They are promoted to the Championship behind Doncaster. It is only the second time in the club’s history they have played in the top two tiers.

2 May 2015 – After a 10th-placed finish in their first season in the Championship, Howe guides the Cherries to the title, pipping Watford on the final day. The season includes an 8-0 win at Birmingham and promotion to the top flight is a first for the club.

17 May 2016 – Bournemouth survive with a five-point cushion after a maiden Premier League season which saw them spend £10m on Benik Afobe and beat Chelsea and Manchester United.

21 May 2017 – Bournemouth finish in ninth place in the top flight, with Joshua King scoring 16 goals in the Premier League.

13 May 2018 – In the relegation zone at Christmas, Howe engineers an impressive recovery and Bournemouth eventually finish in 12th place.

12 May 2019 – Bournemouth are as high as sixth in early December but tail away in the second half of the season to finish 14th – 11 points clear of trouble.